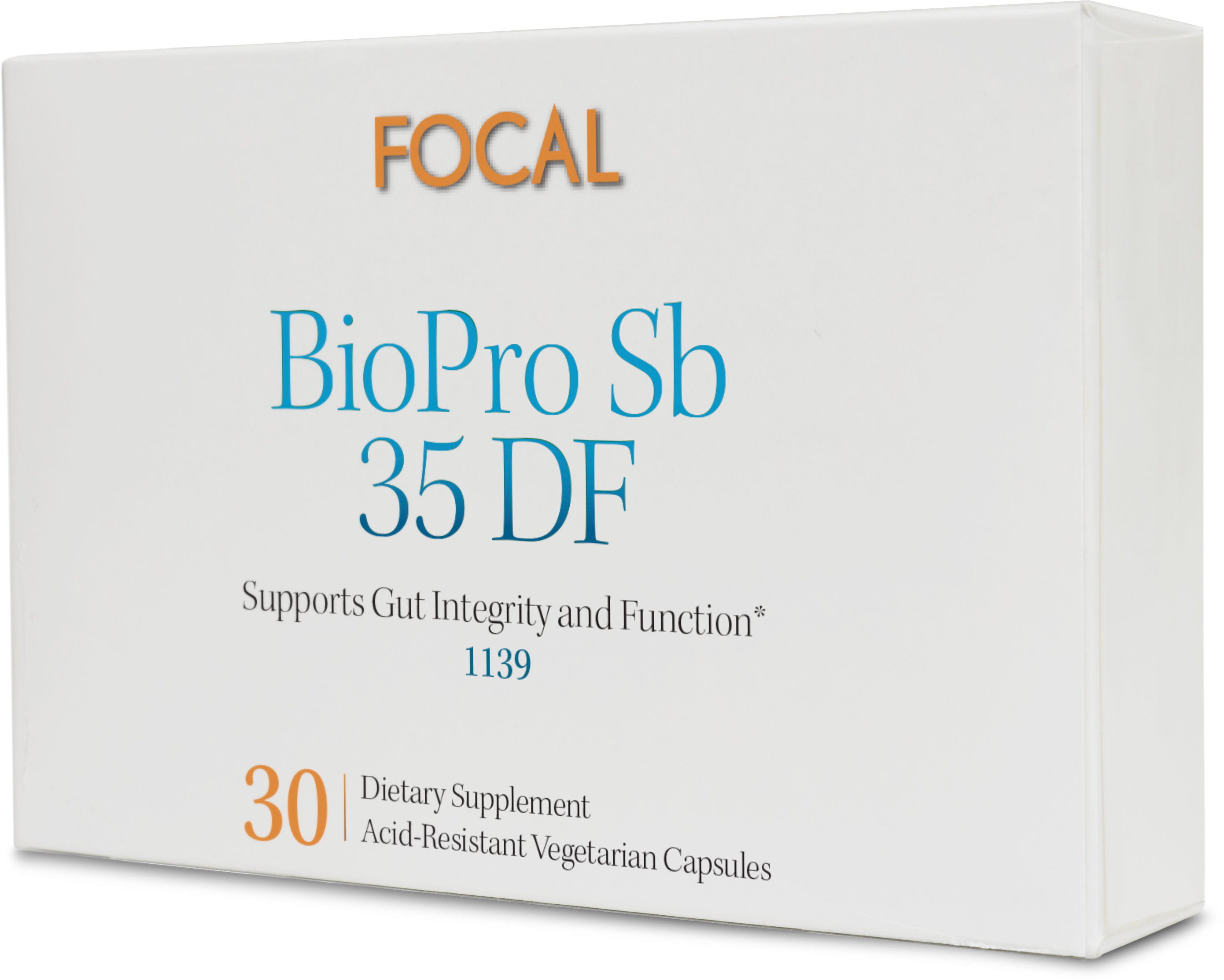 BioPro Sb 35 DF is ideal for individuals seeking a well-rounded supplement to support a healthy balance of intestinal flora, cellular health, and immune health. It features four probiotic strains, including the extensively studied HN019 strain of Bifidobacterium lactis, plus Saccharomyces boulardii (Sb), a non-pathogenic yeast, to further complement healthy gastrointestinal ecology. Gastro-resistant, vegetarian capsules provide an innovative solution for targeted delivery of sensitive ingredients to the small intestine, as they alleviate exposure to the low pH environment of the stomach. Additionally, each capsule is sealed in a nitrogen- purged blister pack to provide protection from heat, moisture, and oxygen, factors known to compromise probiotic stability.*

Diversity of gut microflora is characteristic of a healthy GI microbiome and contributes to overall health and vitality by promoting optimum digestion, assimilation, gut integrity, motility, and efficient removal of toxins and wastes. Many internal and external influences, including stress, a poor diet, food sensitivities, medication, environmental factors, and certain disease conditions, can impact the microbial balance within this fine-tuned community. Their impact can allow potential colonization by pathogenic organisms and disrupt a healthy balance, which can result in adverse effects ranging from GI symptoms to impaired immune response. Probiotics are part of the key to promoting the optimal balance of the microbiome,[4] whether they originate from dietary sources or from supplements. Probiotic yeasts, such as Saccharomyces boulardii, also play a role in gut ecology by supporting intestinal barrier function and integrity.

Common challenges associated with probiotic supplementation are maintaining the stability of the organisms during distribution and shelf life and, after they are swallowed, the survival of the organisms as they travel through the digestive tract to the targeted tissue. To help ensure stability, Focal packages BioPro Sb 35 DF capsules in sealed, nitrogen-purged blister packs to serve as protection from factors proven to compromise the stability of probiotics, such as heat, moisture, and oxygen. Careful selection of organisms is another way Focal helps ensure stability and digestive survivability. To further support resistance to low pH and the delivery of microorganisms to the small intestines, Focal encapsulates the ingredients in gastro-resistant DRcapsTM. These specially designed, innovative capsules help slow exposure of actives to stomach acid to promote a more targeted release.*

HOWARU® (Bifidobacterium lactis HN019) Discovered in 1899, B lactis play a key role in the human microflora throughout a person’s life. Researchers have identified strain HN019 as having excellent probiotic potential based on its ability to survive the transit through the human gastrointestinal tract, adhere to epithelial cells, and proliferate. B lactis HN019 has been extensively studied, and its safety and effectiveness are well-accepted. To assess the impact of B lactis HN019 supplementation on whole-gut transit time in adults, subjects (N = 100) were given daily doses of 17.2 billion colony-forming units (CFU), 1.8 billion CFU, or placebo for 14 days. Decreases in mean whole- gut transit time over the 14-day study period were statistically significant in the high-dose group and the low-dose group, but not in the placebo group. This level of dosing also supported other parameters of healthy GI function, as were self-reported by patient survey. In a randomized, double-blind, placebo-controlled human dietary intervention study , 80 subjects older than 60 years who took supplementary B lactis HN019 had statistically significant increases in the beneficial organisms bifidobacteria and lactobacilli.*

Saccharomyces boulardii S boulardii might be most well-known by consumers for its role as the type of yeast used in the widely popular kombucha beverages. Extensive research in both European and American peer-reviewed journals has shown that this natural, non-pathogenic yeast has multiple mechanisms of action that support healthy gut ecology. In a 2010 systematic review and meta-analysis of 31 randomized placebo-controlled treatment arms in 27 trials (encompassing 5,029 adult study patients), S boulardii was found to be significantly efficacious in 84% of those treatment arms. S boulardii was also found to be efficacious for use in children in a double-blind, randomized, placebo-controlled study that yielded statistically significant positive results for supporting normal gastrointestinal function in children aged 3-59 months. When safety data was examined in adult subjects (n = 2,963) in a trial of patients with Clostridium difficile infections, the adverse reactions associated with S boulardii were minimal (<0.3%): thirst in five subjects and constipation in eight subjects. Another study in children aged three months and older demonstrated that S boulardii can be used safely and effectively in this population group.*

With regard to maintaining normal GI function and transit time, research suggests that S boulardii secretes a protease that may assist in directly degrading bacterial toxins and stimulating antibody production against those toxins. S boulardii is also believed to exert a trophic effect on intestinal mucosa and positively support the immune system.*

This probiotic yeast appears to support normal gastrointestinal flora and integrity; promote production of intestinal enzymes and secretory IgA; and support cytokine balance through its effects on IL-8, IL-6, IL-10, NF- kappaB, TNF-alpha, and PPAR-gamma. Research also suggests a role for S boulardii in the production of health-promoting short-chain fatty acids including butyrate, which supports homeostasis of colonic flora and fuels intestinal epithelial cells among its other benefits. The S boulardii used in this formula is processed by low-temperature vacuum drying for improved stability.*